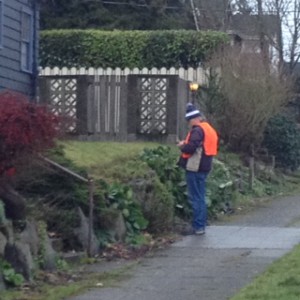 Ballard residents and volunteers might see volunteers in safety vests photographing buildings during the month of February. What are these volunteers doing? They are part of the Mapping Historic Ballard project, part of a grant funded by the Seattle Department of Neighborhoods. They are simply gathering basic data on our neighborhood’s range of pre-1965 buildings.

As part of its Small and Simple grant from the Seattle Department of Neighborhoods, volunteers in safety vests will survey pre-1965 structures in Ballard from 57th NW north to 85th and east of railroad tracks to 8th NW. Throughout February you might see your own neighbors photographing structures.

The result will be a dynamic interactive map. In the future, you might be able to answer these questions: “What buildings existed when Ballard was a separate city? Which buildings were built right around the time that Ballard was annexed by Seattle? My home is called a Tudor Revival… which years were these built, and where are other homes of this style in Ballard?”

Love to look through archives or old property records? You can volunteer for the next phase of our project.

Sorry, the comment form is closed at this time.